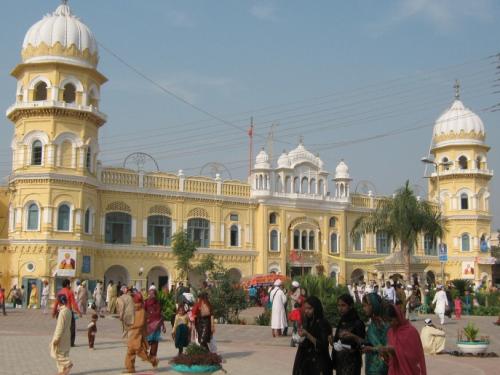 A Gurdwara, meaning the gateway to the guru, is the place of worship for Sikhs; however, people from all faiths, and those who do not profess any faith, are welcomed in the Sikh Gurdwara. The gurdwara has a Darbar Sahib where the current and everlasting Guru of the Sikhs, the holy scripture Guru Granth Sahib is placed on a Takhat (an elevated throne) in a prominent central position. The Raagis (who sing Ragas) recite, sing and explain, the verses from the Guru Granth Sahib, in the presence of the holy congregation.

The Historical Gurdwaras located in Pakistan are an essential part of Sikhism and form an important part of the history of Sikhism. In fact the Sikh religion was founded in the part of the world which is now called Pakistan. The Punjab was divided only in 1947 when the separate nations of India and Pakistan were formed. Prior to this period, the whole of the area covered by the two countries was one nation.

A significant part of Sikh history is linked to places that are now in Pakistan including the village Nankana Sahib where Guru Nanak Dev the founder of Sikh was born. There are around 195 Gurdwaras across Pakistan. Currently we have articles on only 126 gurdwaras of Pakistan.

Unlike the places of worship in some other religious systems, gurdwara buildings do not have to conform to any set architectural design. The only established requirements are: the installation of the Guru Granth Sahib, under a canopy or in a canopied seat, usually on a platform higher than the specific floor on which the devotees sit, and a tall Sikh pennant flag atop the building.Some of the prominent Sikh shrines established by the Sikh Gurus are: