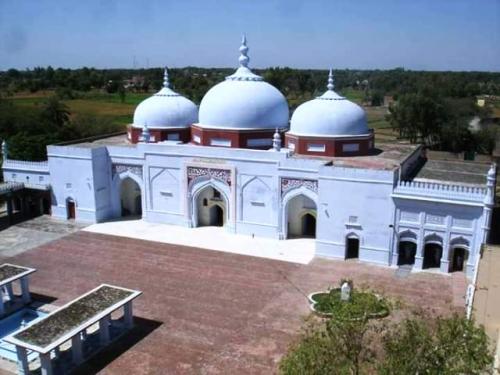 The Mosque believed to have been built by Sher Shah Suri in 1541, the year that is inscribed on the entrance. Sher Shah Suri was a great builder. He is believed to have built many forts, mosques, baolis, sarais (inns) and tombs. However, the most commendable was the Great Trunk (GT) Road. He also excavated baolis (stepped wells) and built sarais on the GT Road for the travelers and his soldiers.
During Sikh regime 1799, the grand mosque was used as a stable by Sikhs.
The Jamia Masjid of Bhera was rebuilt by Qazi Ahmed-ud-din Bugvi in 1858 and later on repaired by Qazi Zahoor Ahmed Bugvi in 1926. The name of the mason, Muhammad Asif, is also mentioned in the inscription.

The mosque has three domes and arched entrances. But this mosque is entirely different from the one built by Sher Shah Suri at Rohtas which is noted for its intricate decoration.
Small bricks have been used in the construction and covered with fresco painting over kankar lime plaster.
The foundation of the mosque is original, of Sher Shah Suri period, whereas the superstructure was rebuilt by Ahmed-ud-din Bugvi. He also built two halls, Quran and Hadith, lying north of the mosque; two minarets and boarding houses are also there for students,” says Sahibzada Abrar Ahmed, the Khatib of the mosque. The three arch entrances of the halls are most imposing and remarkable for their geometric designs.