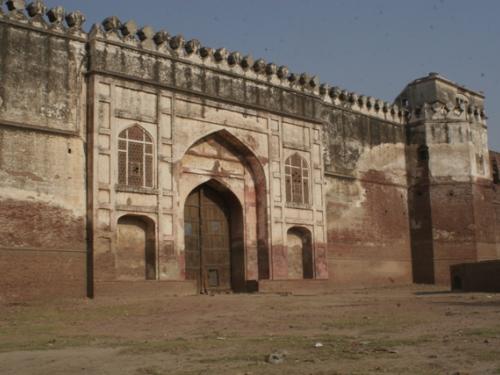 Sheikhupura now headquarter of the district is an ancient town. In A.H. 1015 Emperor Jehangir encamped at Jehangirpura (Present Sheikhupura), which was his hunting place. He ordered Iskandar Moin, the Jagirdar of the Pargana to build a fort there and named of the fort is derived from emperor’s name. The fort is situated in the south east corner of the town of Sheikhupura and covers and area of about 65 Kanals. In the time of Rangit Singh the fort remained for years together the residence of one of his queen’s Rani Raj Kauran, the better known “Rani nakayan”. In the north east corner of the fort there is a room on the upper storey which was probably her residence. The interior of the room is richly decorated with floral fresco paintings in various patterns.

Rani Jindan, the famous queen of Ranjit Singh, who played an active role in the Sikh politics, a few years after the death of her husband, was kept as prisoner in the same fort by the British after the fall of the Sikh rule in the Punjab.

Except the main gateway and fortification wall, which were built by the Mughal the other structures of the fort appear to be built by the Sikhs.