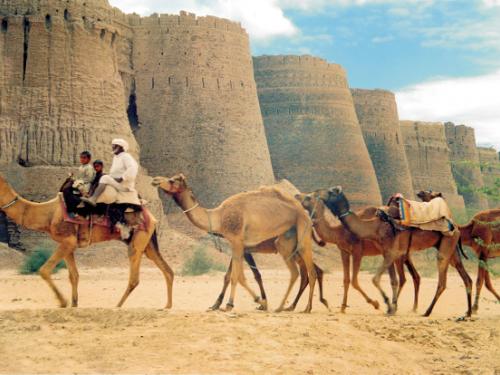 Occupying the far south of Punjab, Cholistan is the largest desert in Pakistan, covering over 25,000 sq. kms area. It extends south into the Thar Desert in Sindh, and east into the India's Rajisthan Desert. Ahead of you is another world where the 21st century does not intrude. About 1000 years ago, the Cholistan was a fertile plain watered by the Ghaggar River (now called Hakra in Pakistan), Along the 500 km of the ancient river course archaeologists have discovered over 400 old inhabited sites, most dating back to the Indus Valley Civilization, In the middle of the desert stands majestically the impressive Derawar Fort, this originally was the ancestral seat of Amir of Bahawalpur. This is the largest and the best preserved chain of forts, built in the days gone by. Its massive walls, holding forty enormous buttresses (ten per side), are now a permanent feature of the desert landscape, as they rise out of the sand in the setting sun. Nearby, is the elegant Derawar Mosque which is made out of marble and is an exact replica of the Moti Masjid in Delhi's Red Fort. it's a place where the stark moon presents an unearthly, yet a captivating vision. And before you realize, you have fallen in love with it. About 45 km south of Derawar Fort, is the shrine of Channan Pir ('Channan' meaning 'moon-like') which is an
important pilgrim center and the desert comes alive during festivals.

The desert also hosts an annual Jeep rally, known as Cholistan Desert Jeep Rally. It is the biggest motor sports event in Pakistan.

There are several forts in Cholistan Region. These are: