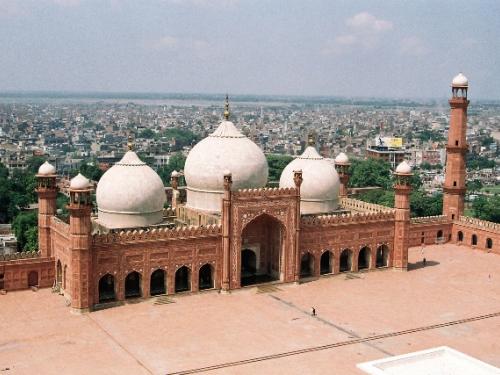 The Imperial or Badshahi Mosque is located in front of Alamgiri Gate of Lahore Fort  and is one of the largest mosques of the world. Built by Mughal emperor Aurangzeb Alamgir, last of the great Mughals, it presents a fine blend of white marble and red sandstone.  This mosque can accommodate about one hundred thousand and built in a record time of two-and-a-half years. Its construction was completed by 1674 AD.

It has a beautiful gateway which measures 21.33 metres in length and a courtyard that measures 161.5 x 160.6 metres and is said to be the largest mosque courtyard in the world for outdoor prayers. The marble domes cover seven prayer chambers. Four lofty minarets stand at the four corners of the mosque, each with an outer circumference of 20 metres, soaring up to 54 meters.